In the past couple of years, I’ve been mostly focused on the environmental, social and health problems related to our current consumerist society – focusing especially on the fashion industry. This has led me to completely stop purchasing fast fashion and promoting more conscious consuming habits. Which, in turn, took me to Fashion Revolution Week. I was beyond ecstatic to participate in an event that whose purpose was to revolutionize the fashion industry and I was already making plans to associate myself with Fashion Revolution in the future.

So I was nothing short of disappointed when the founders kept talking about how they didn’t want to judge any brand and were there simply to encourage people to make more conscious consuming choices. How just thinking about the worker’s conditions was a big step and how brands were starting to make changes to become more transparent and give their workers fairer life conditions. Their main point was that the industry would change if only the people started buying more ethical clothes – every purchase is a vote and we can vote on the products we believe to be more ethical.

So there I was, listening to some of the things I had also said before and I found myself getting all red and worked up, making really eloquent speeches inside my head and getting a headache. Before this day, I wasn’t aware that my mindset had changed but when I heard my former beliefs being uttered by other people and was so passionately disagreeing, I knew the change was official.

I did use to believe that me changing all of my consumption habits was going to make a significant change in the world. I planned on living 100% according to my beliefs, by creating minimum waste, buying only fair trade, organic and local, not supporting animal or human exploitation… And I would lead by example and encourage others to do the same. And that was my plan to change the world.

I was so focused on a bottom-up approach to change that I lost sight of the big picture – the one that connects every actor that perpetuates the paradigm that I want to change. So while there is a somewhat significant growth of green products, the free market still allows big companies to maximize their profits by trashing the environment and exploiting vulnerable people. While I can reduce my personal waste, that is a drop in the ocean compared to irresponsible waste management of multinationals. So basically, while I am trying my best to create a better world with my own little actions and impact (but a huge effort), the real actors of contemporary social and environmental problems are still free to keep making a profit and remain unpunished for making the world a worse place to live in.

This shift in my perspective probably came from reading No Logo, which shows how the problem is systemic and not individual. Our frenetic consumption behaviours are much more connected to the way our capitalist society works (what I usually refer to as the system) than our own personal choices, unlike what I used to think. I used to blame the consumers for not making conscious choices and for putting vanity and hedonistic values in front of ethical and environmental concerns. Now I realize how unfair my mindset was because the system fosters this kind of mindless consumption behaviour and I was wrongly attributing the responsibility to people who didn’t engage in the unfair practices I criticized. People are actually mostly against the labour abuses big companies practice foreign contractors. People don’t actually trust these big corporations and are outraged when they see how fast Amazonia’s forest is being destroyed, or the growth of the Pacific’s plastic island.

The Fashion Revolution’s point of view entails that consumer-based change is the way to go because the more people change, the more people will be interested in the movement and companies will have to adapt to the new needs of consumers.

There are a few problems with this idea. Firstly, for this to actually happen, it would necessarily mean that at least the majority of the population would become environmentally and social aware enough to actually change behaviours – and this last part is important because many people are aware of social and environmental problems (we certainly do not lack information in this day and age), they want better solutions but they aren’t necessarily going to change their habits because they have other things to worry about.

And this is an extremely important part of the equation – we all have different lives, different worries and different passions. In the many seminars, conferences and debates I’ve attended about zero-waste, climate change, ethical fashion, fair trade etc., the demographics are strikingly homogeneous – young people, deeply motivated in ecology and social change. This is no surprise because to engage in a zero-waste lifestyle takes some forethought and adjustment. Or to buy fair trade. Or organic. Or local. But to try and put all of these together… I can’t imagine there are many people outside the ecology field willing to take that much trouble into changing their consumer habits.

In fact, the logistics of putting all of these together are absolutely insane – what’s fair trade is not always organic, and what’s organic is hardly ever package free. For me to buy bulk organic grains, I have to go to the other side of the city (by subway because I don’t use a car), and then go all the way back to get cleaning products and other cooking items that come in glass and then go to another market to get organic local bulk fruits. Which costs a fortune. But I live a simple life and my only luxury is to be eccentrically eco-friendly. However, I live in the capital, I am child-free and middle-class. In some smaller towns, you can’t even find organic markets, much less fair trade clothes.

This is an effort that I can make and that makes sense to me but I understand that it doesn’t make sense to everyone – my cousin with 5 kids and a job buys all of her family’s groceries online, and the cheapest ones if possible! Everyone is different and that is a great thing. Some people are passionate about science and live inside a lab, figuring out the mysteries of our Universe. And some people live for literature and dedicate all their free time reading in a library. Some people work and are parents, and worry if they are raising their kids right. And then a lot of people struggle financially, live in precarious working conditions, live in unsafe areas, live in the countryside, live with addiction, mental illnesses. Some people are political activists. And feminists. And actors, writers, teachers and nurses. And most people just can’t afford to make political choices with every purchase they make.

And you know what? They shouldn’t have to. Because every trip to the supermarket should not involve a complicated set of ethical choices. Because child labour, mindless deforestation and water pollution should not be legal.

The term purchase-vote is officially banned from my discourse now. It is a term that entails the problematic view that we are all consumers, before citizens. That the biggest change we can make in the world is using our wallet, spending our money. These big companies using contractors in Third World countries are literally breaking the Human Rights Bill, but instead of demanding legal repercussions, we should just spend our money elsewhere. Which is an extremely convenient view for a capitalist economy – we spend our money in small businesses with ethical practices, feel better because we have the feeling that we are slowly changing the world, the big companies with problematic policies still make billions of profit, and everything stays the same. Realistically, most people are not going to make the change, both because it is so inconvenient and because big brands invest billions in advertising to make their products irresistible, independently of ethical concerns.

We live in a society that is so focused on the capital that we accept naturally our identity as consumers. That is why I still use the term capitalism, even though it is outdated and it is more frequent to talk about a market economy or neoliberalism. I speak of capitalism because the focus of our economy is to create wealth and to reinvest that wealth in order to create more wealth. This system has completely proven the trickling-down theory wrong as the companies with most profit are the ones that enslave most workers – just watch The Machinists about factory workers in Bangladesh (I unapologetically talk about slavery because 16h/day work schedules and 22cents/hour wages give these people absolutely no opportunity to build any sort of life of their own outside work).

This system has tried to convince us that our best way to influence our society is by spending money – as consumers. But we are citizens. And we as citizens have much more power than as consumers. As citizens, we have true power to influence society and demand the truly fair and safe world we deserve. So that when people go shopping it doesn’t matter if they choose bigger apples or smaller apples because they will both be fair trade and organic. And when new mothers go and buy clothes for their children, they will all be chemical-free and truly support the workers that have made them.

We have this kind of power, I truly believe in this. But we are too disperse, too distracted with information, too focused on reforming the system when the system itself will never bring us the world we want. If all of these people that go through so much trouble to live in an eco-friendly way would just join forces and enthusiasm, just imagine what could be done.

I am not going back to fast fashion, or to plastics. I want to be coherent to what I vindicate and I want to show that there is another way. But now I realize I am not changing the world just through my habits. Now I realize we need a deep structural change and the rest of my life will be dedicated to joining forces and creating true and lasting change.

Let me know what you think of this change in mindset, and if you see political activism as a way to change our paradigm. 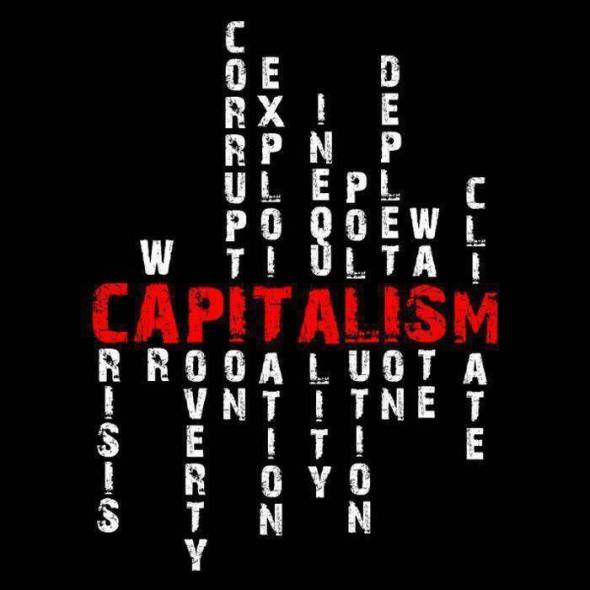 It all comes down to a system that unapologetically puts money before people and the environment!

Check out Naomi Klein’s speech We Can Only do This Together!

Review: No Logo by Naomi Klein »
« Having a spiritual connection with nature